COVID-19 and The Implications of Rising National and Corporate Debt 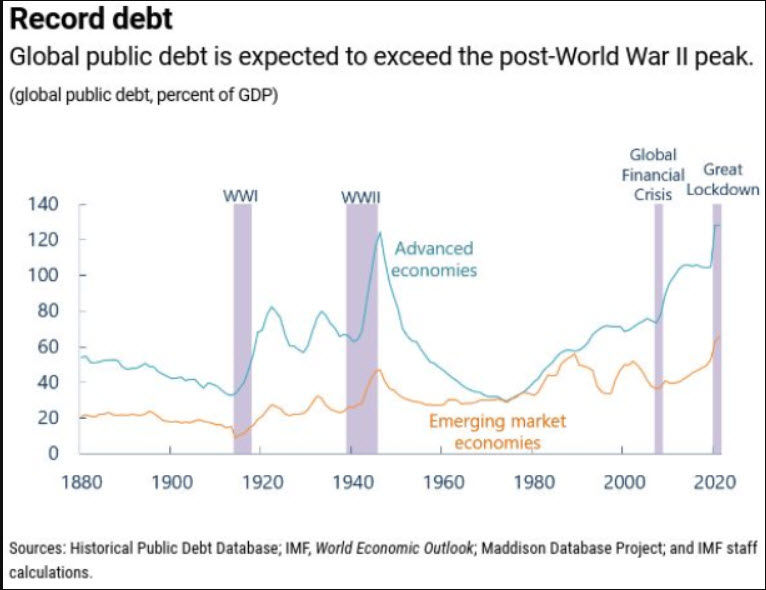 The arrival of COVID-19 has caused the greatest disruption in the global economy since World War 2. It has exposed significant weaknesses in the modern day global economy and in the healthcare systems to respond to such a pandemic.

This article is going to focus on the impact that COVID-19 is having on the national debt, both globally and nationally and on corporations as well as the potential implications of the latter, especially as we do not know how long COVID-19 will be with us or when an effective vaccine will be proven out, distributed and administered.

At this stage in the pandemic we can point to actualities. The International Monetary Fund estimates that public debt as a percentage of GDP will rise above 130% in 2020 and 2021. It will exceed levels only seen during and after World War 2. Global debt is close to 331% of GDP or a staggering $258 Trillion and in more mature markets it is estimated to be as high as 393% of GDP. These numbers are hard to digest. Britain's national debt for example is forecasted to be at 418% of GDP in 2070. Only 4 years ago economists were forecasting it would be 87%.

The basis for justifying high or higher debt levels is future economic growth along with population growth. However population growth is not necessarily a certainty in many countries. Britain's Lancet magazine is forecasting that global population levels are likely to fall by 2064. They see at least 23 countries including China, Japan, Spain and Thailand possibly halving in size by the end of the century. Such population shifts are going to have a seismic impact on these countries ability to service debt and growth.

For the purposes of investing over the long term, economists and investment managers will be watching these national and global trends closely, as they play out.

Now, let us shift our attention to corporate debt. Needless to say it is on the rise with $4,6 trillion of bonds sold in the second quarter of 2020 alone, compared with a more typical quarterly average of $2.8 Trillion. This trend is likely to continue while COID-19 is at large and until we have a vaccine that has been administered. Corporations have three options to raise money. They can issue more shares, take on more debt or do a combination of the latter. Taking on more debt is attractive to coporations because it boosts "Return on Equity" and limits the number of of new shares coming onto the market. The more leverage used, the higher the returns providing capital is invested successfully. The challenge with taking on so much debt is when you run into a major roadblock such as a global pandemic.

The debt is still due while revenue and earnings are severely impacted and thus the ability to service that debt is more challenging. In a close to zero interest rate environment, corporations have been accumulating record debt levels well before COVID-19 arrived. The inability to pay back debt inevitably results in defaults and bankruptcies. To date, 420 companies have gone into bankruptcy in 2020 including Lord & Taylor, Hertz, California Pizza Kitchen, Jos A Bank and 24 Hour Fitness. Analysts believe that the number of bankruptcies will exceed those during the great recession between 2008-2010. Things are likely to get worse before they get better.

Standard & Poors has already downgraded 1,910 companies in 2020 alone and the year is not up. That is an all time record!

The number of companies with a credit rating of "B-" is approaching more than 600, another all time high. It's more than double the peak during the 2008-10 crisis. These companies have a 8x higher chance of defaulting compared to the overall default rate. In the last survey of banks, 70% of banks said they were tightening credit and lending. In the past this has typically signalled anticipation of higher default rates. Banks are required to take stricter provisions for defaults and bad debt when economic conditions dictate they do so. This is one of those times. Banks are preparing for defaults.

Remarkably however, due in large part to Federal internvention, the high yield credit spread is still relatively low - about 500 basis points - which signals that investors are not overly concerned. We should add "yet". The Federal Reserve is unlikely to bail every company out, especially as debt loads increase and revenue falls among the more vulnerable B- rated companies. Any increase in the timeline for a vaccine to be developed and dsitributed will delay a full recovery and every quarter of additional delay is goign to increase the economic impact of COVID-19.

The interventon of the Fed is propping up the financial system to a very significant extent. The infamous investor "George Soros" believes we are in a fed induced bubble that is unlikely to end without consequences.

As the market reaches to its prior all time high's despite all the vulnerabilities mentioned herein plus others we have not covered in this article, we believe caution is in order. This would be an excellent time to do a portfolio review to make sure you can stay clear of companies with high debt levels and at risk of default.

Call or email us to set up a portfolio assessment. All conversations and information shared are strictly confidential. There is no further obligation on your part.

The Markets & Gold Rise Together, Warrren Buffets ...
How Much Do You Need To Retire On?